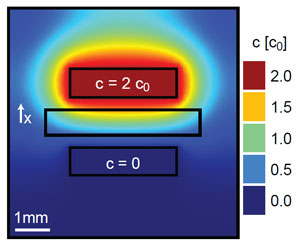 Our group’s soft matter interests have been focused on the behavior of liquid, colloidal and living systems on length scales that are much greater than atomic.  Currently, our main effort in biological physics has been directed at understanding the social behavior of microbes along with the physicochemical systems that enables their intercellular communication. We have been particularly interested in the remarkable transition from unicellular to multicellular life that the organism Dictyostelium discoideum (“Dicty’’) makes in reaction to the removal of its food supply. Recent work by graduate researcher Igor Segota exploited microfluidic technology to measure key elements of the signal-response system necessary for this transition to social life. Specifically, we have been studying the movement of individual amoebae in response to a static gradient of a signaling chemical. Based on earlier work by graduate researcher Elijah Bogart and with assistance from undergraduate researchers Archana Rachakonda, Catherine Lussenhop, Eitan Neidich and Surin Mong, Segota has shown (for this and other work described here, please see our recent papers) that there is a failure in current theory for the fidelity of information passing in such systems. Our current efforts are aimed at replacing this flawed application of Shannon’s theory of communication.

Segota has also argued that the biochemical circuitry responsible for low noise signal detection is critically occurring just outside the cell where the most recent microfluidic techniques aimed at quantitative measurement could be ruining the apparatus by sweeping it away. He is therefore preparing new experiments that explore the signal processing that chemical-sensing cells perform in the intercellular medium. In other work recent undergraduate researchers Emily Lawson and Ryan Monaghan and graduate researcher Kayvon Daie have been altering the signaling medium through which extracellular messages may pass and discovering the consequent changes in the means by which Dicty manage to congregate. These perturbations have exploited novel wetting and microfluidic environments. We have also developed theory to match these observations by considering the problem of synchronizing many oscillators via long range chemical signaling.

Our  recent work has also explored the diversity of growth behaviors possible in this system. We have been developing theory to match by considering intrinsic noise and cell adhesion effects. Our 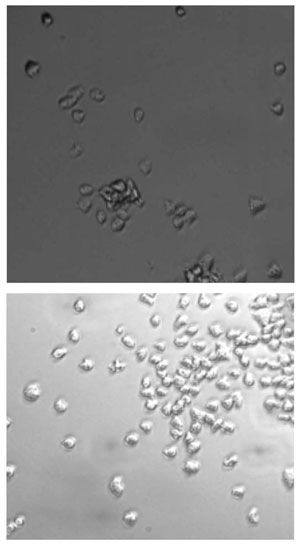 work has relied on genetically modified organisms, microscopy (including confocal) augmented by digital image processing, and macroscale and microscale reactor biotechnology.  In recent work, Kevin Tharratt has discovered an exciting memory effect where different growth behaviors are found to be heritable. In an effort to increase the throughput of our investigations, we have been developing new automated cell counting systems based on light scattering. Hopefully, we will obtain sufficient instances of growth dynamics to decide between rival theories.

In work begun by Sungsu Lee we are also starting to observe and quantitatively analyze cell images that we expect to reveal the dynamics and explore the collective nature of cell proliferation in unmixed cell systems on surfaces. We are particularly impressed by Sarah Bennedsen’s recent finding that such cells naturally adhere, forming few-cell clusters that skillfully move as one. Recent efforts by Chenzheng Wang, Junseok Oh and Ithaca High School investigator David Franck are demonstrating that other-wise under-appreciated changes in stirring protocols for suspension culture can have dramatic effects on cell proliferation. Accordingly, Ziyu Ye has been developing a scheme to quantify mixing by monitoring droplet coalescence. In summary, our work strives towards our goal of uncovering the quantitative bases of communication and computation in living matter.